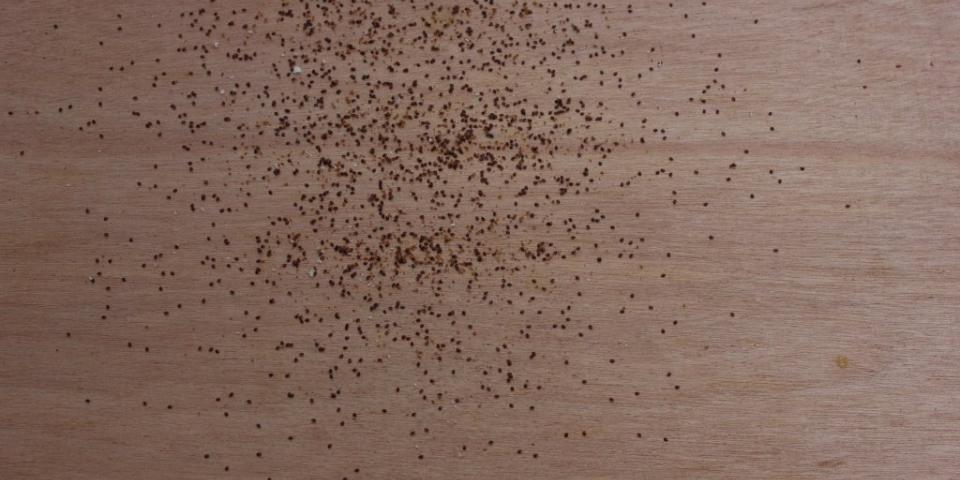 Peering outside this morning, I looked across at the girls and all was quiet on this cold and drizzly sort of day. Interesting to see that where Lizzie and her family are clustering towards the front of the hive, there's a dry shape on the outside of the hive. The weather this month seems to bring with it a range of different temperatures. One day there's a hard frost, the next bright and sunny and the girls are out flying. With the frosty weather last week, it was ideal to venture into unknown territory for me as a new beekeeper... that of treating a high infestation of varroa mites with oxalic acid - a natural chemical found in honey and many vegetables but toxic in large doses.

Three long minutes last week were repeated this week. As I switched on the battery to charge the Api-Bioxal powder, I again heard the roar of the bees as the fumes began to wend their way up towards them. There was no question about should I be doing this as the answer was a resounding yes. Sadly our honey bees have no natural defences to be able to deal with varroa themselves so beekeepers have to manage the populations to try to prevent their colonies from being overwhelmed as it leads to a disease called Varroosis and when left untreated an infested colony will usually die within 2-3 years.

So, here I am trying to get the level of varroa back to a more manageable level. I do wonder if our climate has anything to do with how many varroa we are finding so late in the season when, if you read the text books, colonies will already be clustering inside their hives to keep warm as they don't hibernate. Yes, they are clustering, but when the temperature is right, out they come for either cleansing flights or looking for forage - all of which uses energy - and in December there is very little forage around for them to gather. Beekeepers around the country are reporting that their bees are still bringing pollen back in December, which may suggest that queens are still laying this late into the year. If the queens are laying late, this is ideal conditions for varroa as they lay their eggs in drone cells. However, the queen stops laying drones (boys) as she starts making her overwintering preparations so could it be that the varroa are laying their eggs in the normal brood cells, despite them preferring drone cells?

Whatever the reason, from now on I'll certainly be more vigilant and do more regular checks for varroa throughout the year and have my fingers and does crossed that Lizzie and her family will get through this - a valuable lesson learned in this, my first beekeeping year.

Natural history of the varroa mite

Originally confined to the Asian honey bee (Apis cerana), it has spread in recent decades to the Western honey bee (Apis mellifera) and is now their most serious pest because they lack natural defences to be able to deal with the parasite by themselves. The mites feed on brood, weakening them and spreading harmful pathogens such as bee viruses. When populations overwhelm a colony, it leads to a disease called Varroosis and when left untreated an infested colony will usually die within 2-3 years.

It was first found in the UK in April 1992 and listed as a notifiable disease in the UK until March 2006 when Varroa was removed from the list. Today, the majority of hives live with Varroa and the levels are managed by the beekeeper.

The full life-cycle of the varroa mite happens all within a beehive and consists of two stages:

To breed, a female varroa mite enters an occupied brood cell just before the cell is capped where she will stay in the brood food under the honey bee larva until the cell is sealed. She prefers drone brood but will also breed in worker brood.

About 4 hours after capping, she starts feeding on the immature bee, establishing a feeding site from which her own offspring can feed as they develop.

After 60-70 hours after capping, the female varroa mite lays her first eggs. Each female will lay 5-6 eggs, the first of which is always a male egg followed by 4-5 female eggs laid at regular 30 hour intervals.

The male hatches first followed by the females. He then proceeds to mate with all his sisters within the cell. This in-beeding does not cause genetic weakness and can help the varroa mites by breeding in resistance to chemical treatments.

The development of the varroa mite is then through two juvenile stages before becoming an adult:

Time from egg to adult for males is 5-6 days whereas for females it is 6-7 days.

Varroa mites are mobile and can easily move between bees within a hive. However, in order to travel to other colonies, they rely on adult bees for transport through the natural processes of drifting, robbing and swarming. In this way, the varroa mites can spread slowly over long distances.

At the same time, beekeepers who move their colonies around, are also providing a means of spreading the varroa mites over long distances.

Varroa mites can live from 27 days to 5 months and in the summer months, they can live for about 2-3 months providing food is available. During this time, they can complete 3-4 breeding cycles. During the winter months, the varroa mites feed on the honey bees within the cluster until the queen starts laying again in the spring.