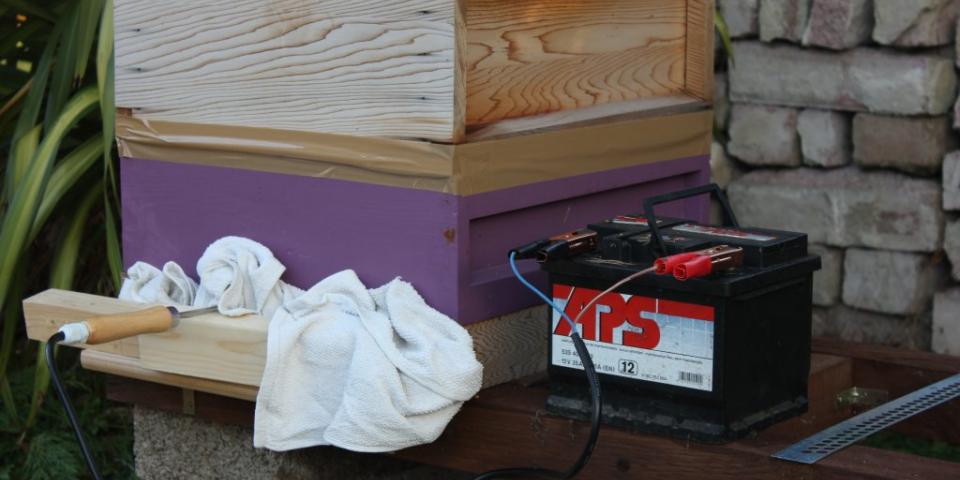 It's been a while since I last wrote about my beekeeping journey and the books tell us that as the autumn months slip away, our bees should be preparing themselves to see them through the winter. This is a time when the queen stops laying, the drones (boys) will have been kicked out and the colony reducing in size. With the hive all closed down, there's no inspections to do, other than to check the reduced entrance, heft the hive to gauge amount of honey stores inside and generally check around the hive to make sure all is well.

Here's the thing... I've done everything I needed to do as a responsible beekeeper and managed to prevent them from swarming earlier in the year and regularly inspected the girls to ensure they were healthy (just needed one treatment of MAQS in August to bring the level of Varroa mite down). With very little to do now, out of curiosity I wanted to know where Lizzie and her family would be clustering inside their home. The obvious way to find out was to slide a board in underneath. This board is normally used to monitor Varroa mite drop, so I would also be able to see how things were going following the treatment in August.

After a week, I ventured out into the garden one cold and frosty morning and pulled the board out. There it was, the shape of the cluster clearly marked on the board by the debris that naturally falls showing that they were clustering towards the front of the hive. Absolutely fascinating to see. What wasn't a joy to see (and count) was the high level of Varroa mites that had fallen onto the board. Putting this all into perspective, a Varroa mite on the back of a bee's back is equivalent to us walking around with a dinner plate strapped to our own back. They're bad news for the girls as they are an external parasite feeding off the bees by sucking their blood. Colonies have been known to collapse with a high infestation of Varroa mites.

Winter is a tough time for bees and it can be touch and go if they make it through to the Spring. I know I've done the right thing by keeping a full super of honey stores on for them as well as knowing that they have a good store of honey in the brood box. Not only is this food, but it also helps to insulate them from the cold outside.

Winter is not normally the time to be treating your bees, but if Lizzie and her family are to have a chance of surviving this Varroa mite infestation, then I had to see what options were available. Let's cut that down to one option after doing some research – Api-Bioxal – which can be applied by either trickling onto brood frames or vaporisation during Winter (or broodless periods).

A beekeeper with years of experience might choose to open up the hive and get on with the job in hand very quickly.

On the other hand, a beekeeper with less experience (myself) shouldn't even attempt this. With the temperature as cold as it is, the longer the hive is open, the more harm it can do to the bees. The brood will be chilled causing more problems.

Anything that meant I would cause the minimum disturbance to the girls was good enough for me and that meant taking the vaporisation way.

Within a couple of days I had ordered (and received in the post) the Api-Bioxal treatment and a vaporiser. Not forgetting goggles and face mask (thanks Dad for my early Christmas present)!

This morning, just after the mist and ice had cleared, I ventured out into the cold to pop the board back underneath, taped around any edges to make sure the fumes wouldn't leak out of gaps (should there be any), removed the mouseguard and inserted the vaporiser two-thirds of the way through the entrance then finally filling the rest of the entrance with a couple of tea-towels.

With everything ready, I attached the leads to the 12v battery and waited 3 minutes as it said in the instructions. Three minutes can seem an awfully long time, especially when you begin to hear the girls inside starting to fan their wings even harder causing the sound of the buzzing to be louder than normal. I genuinely felt for them as pretty sure it would not have been pleasant inside for them. But as the saying goes, you've got to be cruel to be kind – cruel to the Varroa mite in the hope that you are being kind to the bees in the long-term.

The girls are all settled this evening and all is quiet. I do my usual thing and bend down to put an ear on the side of the hive and just listen to the sound of their quiet buzzing.

I've got my fingers crossed that they won't need another zap of Api-Bioxal, but the board is back underneath this evening so I can check to see how many Varroa mites have dropped during the treatment over the coming week.