Skip to main content
Home | Who said beekeeping is easy?

Who said beekeeping is easy? 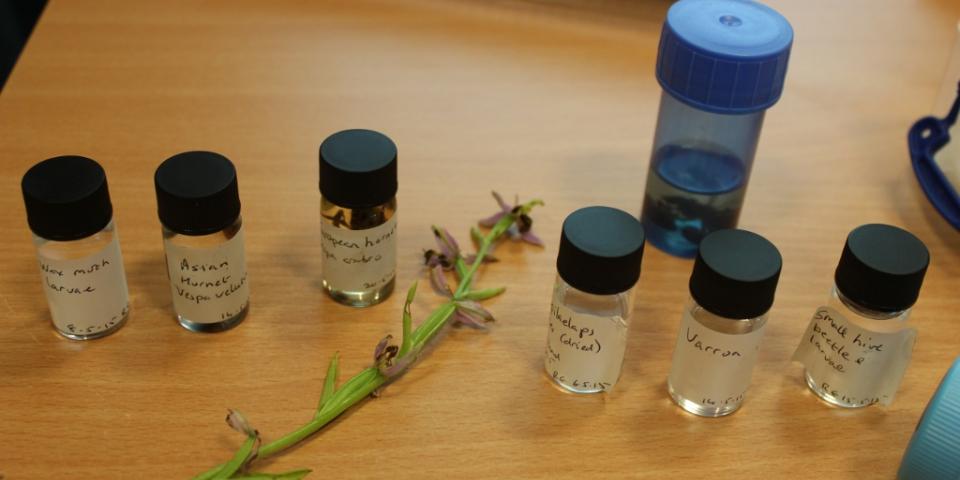 Saturday - a day to lie in and take it easy after a busy week at work. Except this morning's alarm was set extra early to get me up and out of the door by 7 o'clock for a drive across the Devon border into Somerset to attend the County Disease and Husbandry Day organised by the Somerset Beekeepers' Association.

Two hours later I had registered my attendance and took my place amongst the 50-60 other beekeepers in Edgar Hall, Somerton who were all introduced to Simon Jones, Regional Bee Inspector (South West England) and five of the county's Seasonal Bee Inspectors: Eleanor Burgess, Leila Goss, Eric James, David Packham and Megan Seymour who were on hand to answer questions throughout the day as well as give their own talks and workshops.

Simon started his talk on apiary hygiene and disease control with a question: what are we trying to control as beekeepers? Varroa control is certainly at the top of the list because of the destruction it could cause to colonies if left unmanaged, as well as Foulbrood disease in honey bees, and other diseases As responsible beekeepers it was stressed how important it is to regularly inspect our colonies to catch early signs of disease and if seen (or even unsure) to contact our nearest Seasonal Bee Inspector straight away to help test and if necessary, contain the disease. To summarise, a beekeeper should:

The next session led us into the world of Varroa biology, integrated pest management and approved veterinary medicines under the protective wing of David Packham to talk us through the non-chemical methods of Varroa control. One thing we, as beekeepers, need to accept is that we won't get rid of Varroa in our colonies, but we need to learn how to live with it and manage the level so it is at an acceptable level. If you think that a honey bee in the height of the summer only lives six weeks, three of which are spent inside the hive, its life can be drastically cut short by two weeks when Varroa levels are high. It's extremely important, therefore, that we control these levels at the right time of year to maximise the drop in Varroa. We were shown products on the market that we can use but one of the most effective ways to manage Varroa is to do an artificial swarm as soon as you see your first queen cell. By doing this, we can get rid of around 90% of Varroa. It's too late in the beekeeping year to do this now, so it's definitely something I'll be looking out for in the springtime.

Before breaking for lunch, it was time to don our beesuits and wellies for a practical demonstration at the apiary where we had hands-on experience of going through a hive with guidance as to what to look for when checking for foul bood and exotic pests. These sessions I always find extremely valuable because it brings together beekeepers of all ages and at different levels of their beekeeping journeys. As a newbee I try to soak up as much knowledge as I can, but it's clear from listening to others who have been beekeepers for a number of years, they too are still learning. 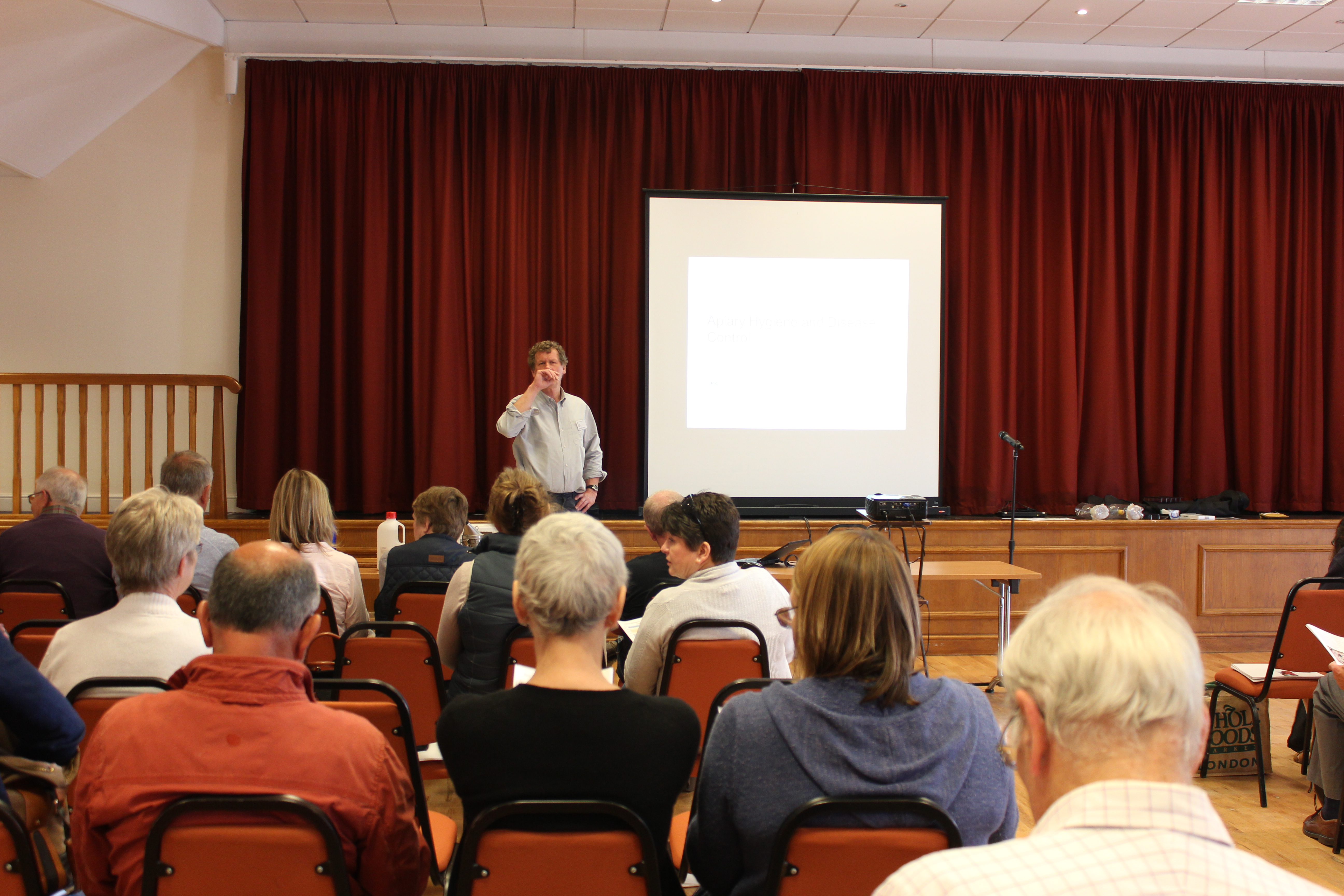 With packed lunches out of the way, there wasn't the usual afternoon presentation where you tend to 'nod off' but another hands-on session in the diseased comb recognition workshop. As we entered the room we were given gloves and aprons to wear as in this room there lurked some extremely dangerous diseases that our honey bees face. The last thing we wanted to do was walk out of there carrying anything back into our own colonies! Laid out before us were 16 frames for us to identify diseases, with sampling kits available for us to use and check the results. Our Seasonal Bee Inspectors were on hand to offer guidance and encouraged us to really think and to read the evidence on the combs. Looking at real comb with real examples of disease is a real eye opener and goes beyond just looking at photos in a book or on the Internet. Out of the 16 examples, I managed to identify 8 - well, with a lot of help and cribbing from others (possibly)! But I did go back and look at the combs again to try and remember what I saw for future reference.

The final talk of the day was by Eleanor Burgess on exotic pests concentrating on the Small Hive Beetle and Asian Hornet which are the next threats knocking on the apiary door. If these two pests arrive then it's going to change the way beekeepers manage their colonies. It's up to us, as beekeepers, to do our bit to monitor and report any sightings straight away. During the spring-summer months is when Small Hive Beetle is most active in beehives and if left undetected they will decimate the whole lot. As at today's date, Small Hive Beetle is still being found within the exclusion zone it was first detected in Italy.

It seems our own European Hornet is having a bit of a rough time following recent newspaper reportings on the Asian Hornet and people jumping to conclusions (and scaremongering) that they've seen an Asian Hornet! These are smaller than the European Hornet and easily identified (if correctly informed) by its yellow legs and black body and the reason beekeepers are concerned is because they could prey on honey bees at an alarming rate if left to spread throughout the country. Asian hornets are widespread in France having arrived there in 2003/4 in a shipment of bonsai pots from China where they rapidly spread throughout the country and into Italy and Belgium. Potentially they are ready to fly over to the UK and, as beekeepers, we are being asked to be vigilant and report any sightings.

So, at the end of the day, what did I get? I took away with me sound advice on how I can now control Varroa in my own colony which I'll be treating in August ahead of the colony going through winter in a healthier state. With hands-on experience in both the apiary and disease comb workshop, I feel more confident in knowing what I'm looking for. In fact, at the apiary I mentioned I had yet to see the eggs laid by my queen bee so we took a look through and there they were. This small nugget of help was just what I needed.

One other thing... I'll be having a "Blue Peter moment" to make a couple of of Asian Hornet monitoring traps to hang around the garden. Living on the south coast of England, we are only a flight away from the Asian Hornet preparing to land here in the not too distant future. Fancy having a go yourself? The more monitoring traps, the more chance we have of detecting this pest to honey bees before it has a devastating impact.