Skip to main content
Home | Unexpected swarm in a hedgerow

Unexpected swarm in a hedgerow 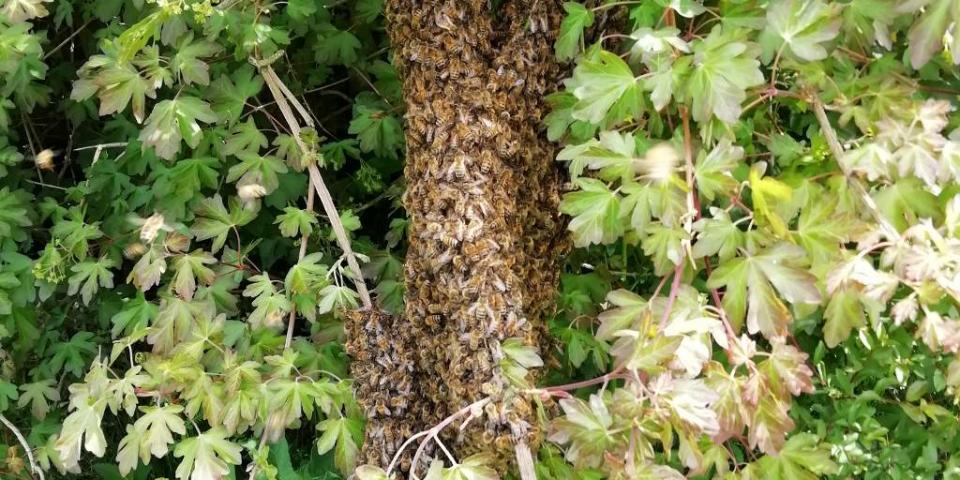 Working full-time and carrying out weekly inspections of my 12 colonies during the swarming season is challenging, but by sticking to a rigid routine its helping me to balance both work and beekeeping.

We are in very challenging times with what's become the new norm during the Covid-19 lockdown. We are lucky, as beekeepers, because our bees are classed as livestock and as such, we have been able to go and check them as part of the ongoing management of our colonies.

One thing I have missed though is the company of my beekeeper buddy - aka BB. This time last year it was full on swarm alert with swarms issuing from her own colonies. It was the first time I had seen a colony swarm straight from a hive. The sound is incredible and something not forgotten. In my beekeeping world, it's up there as one of my top 10 wonders of the world like the Taj Mahal in India is to many.

This wekeend the car was packed to the hilt with beekeeping equipment to try and cover all possibilities of what I might need. Even having a plan, there's always a curve ball thrown in. Carrying a nuc (small box with 6 frames of foundation) or two has become essential during the swarm season, just in case I see charged queen cells and need to carry out an artificial swarm to prevent the queen and half the colony flying off. Swarming is actually a natural process for bees and a form of regeneration. All the beekeper is doing is preventing the swarm from leaving to either house in a new beehive or later unite back with its parent colony. It's not such a problem living out in the country if a swarm was to fly away, but in built up areas, your neighbours wouldn't be happy if your bees set up home in their chimneys or house eaves - not good beekeeping PR!

Talking of a swarm that has already left the nest, what should I find when turning up at one of my apiaries, but a swarm hanging in a hedgerow. I've since learnt not to panic - thanks to my BB for all the experience of catching swarms last year. Instead, I lit my smoker and then went and assessed the situation to work out how best to catch the swarm.

As I said, my car was packed for all scenarios, one of which was for swarm prevention. Out came a spare poly nuc. These are absolutely great and so versatile - housing a swarm, alongside a hive during inspections to pop frames into to give you space in the brood box, etc.

The swarm was about 3 feet from the ground wrapped around a couple of branches from what I could see. I would need a pair of secateurs and my step bench. My plan was to cut back some of the smaller branches around the cluster and stand the nuc on the stop bench beneath the cluster. Once everything was in place and branches trimmed back, I could see clearly the two main stems the cluster was around. Gently clipping each of these branches and holding them, with one swift jolt down, the cluster fell into the nuc and onto the frames of new foundation. I was confident the queen was in there somewhere. It was almost 'text book' perfect!

With the nuc lid on, I left it there and watched. Bees were fanning in the entrance which is a sure sign the queen was inside. Fanning is when the bees expose their Nasinov gland to release a pheromone which acts like a homing beacon. Once a colony becomes established and they have mapped out where home is, this fanning isn't needed. A swarm, for instance, is away form its original colony and each bee has yet to map out its new home. So they fan their Nasinov glands to help each other locate their new home.

With the swarm successfully in the nuc, I then went and checked my colonies. Was it a swarm from them or somewhere else? I certainly saw a marked queen in one, so it wasn't from there. The other colony were a little tetchy, but although I didn't see their queen, there were 1 day old eggs so she may still be in there somewhere.

Having finished my inspections, I left the swarm to settled to return later in the day to collect and move to another apiary... more about that later.