Skip to main content
Home | The joy of swarming

The joy of swarming 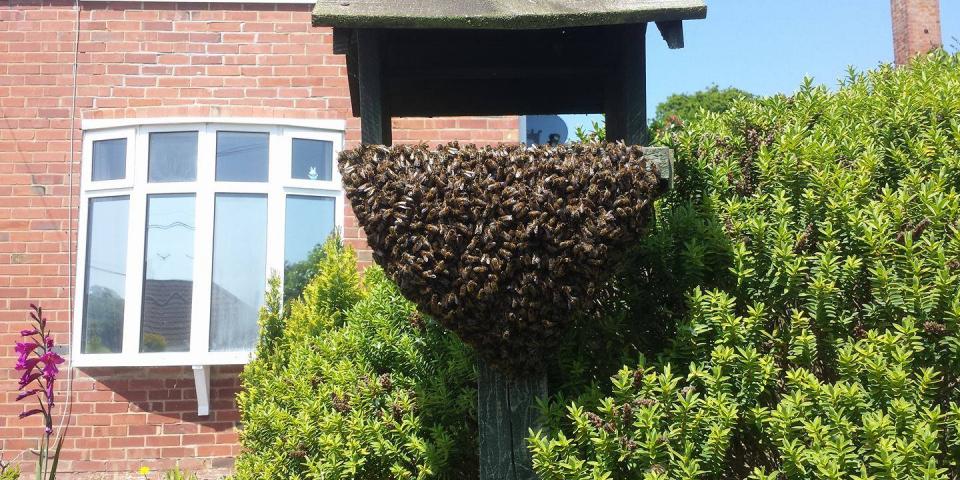 I've taken this title from a presentation our Regional Bee Inspector, David Packham, gave at the Avon Beekeepers' Spring Day in April because what a joy it was to go and help collect a swarm of bees. Over the past few weeks, I've been hearing about lots of beekeepers collecting their swarms and been in envy. Being my first time, I got into a panic when I received a call from Allan, a beekeeper friend, saying he'd got a call about a swarm and would I like to join him. I soon settled down and gathered everything I needed - bee suit, wellies, gloves, smoker. I already had a brood box charged with frames of foundation, so was good to go.

All I knew was that the swarm had just issued from a chimney and the home owner was very keen for someone to come and take the bees away!

What a lovely sight to see - a beautifully formed cluster of bees hanging from a bird table. I've heard beekeepers say that you can put your hands into the swarm and won't get stung. Allan showed me first and then I had a go too. It's an incredible feeling you get and I really was in awe of it all to be honest.

Anyway, there was a job to be done, so on went our bee suits just to be safe. The bird table was well and truly fixed into the ground, so we couldn't shake the bees into the box below. Quick thinking, I asked the owner if he had a dustpan and brush we could use. Gently sweeping, the bees were brushed carefully and then tipped onto the frames of foundation. We knew we had the queen because her entourage of workers started fanning their Nasonov glands to guide the other bees towards her.

With them all safely gathered, we closed up the hive and left an entrance for the remaining flying bees from the primary swarm to return to. Allan said he already had enough colonies and the swarm was mine to take home, so later in the evening, I returned with my partner Dave to collect.

All was quiet as we donned our bee suits (just in case) and made the hive secure to load into the back of the car to take to their new home here in Budleigh Salterton. We put the hive on its stand in the out-apiary and opened up the entrance and watched. Not one single honey bee came out! After the disturbance of being moved, I would have thought we might see one, but nothing. I looked at Dave and said "Do you think there are any bees in there? It's very quiet. Or did they all fly off and we've brought back an empty hive?" Just to be sure, I took the roof off and peered briefly inside... yes, there was a swarm of bees inside... still!

Well, that all happened earlier in the week, and here it is this bank holiday weekend and I've started feeding them 1:1 (1lb sugar:1 pint water) sugar syrup. This is because when a swarm leaves its nest, the bees first gorge themselves with enough honey to feed themselves for a couple of days while they are still deciding where they are going to set up home. By leaving enough time for the bees to deplete the food they brought with them, helps ensure that any brood diseases that were in the original colony isn't transferred into the new colony as it builds up over the coming months.

Earlier this morning, I popped a board in under the floor to find out what the level of varroa is in the colony, which I'll leave there for the next 7 days to calculate the daily varroa mite drop. Other than that, it's now up to them to start making themselves at home and for the wax builders to start building the foundations of their new nest.

I now have three colonies of bees and would say it was an honour to be part of this swarm collection. Any beekeeper who hasn't yet collected a swarm, I guarantee it will be an experience of a lifetime.

The image is attributed to Allan Emmet. All rights reserved.