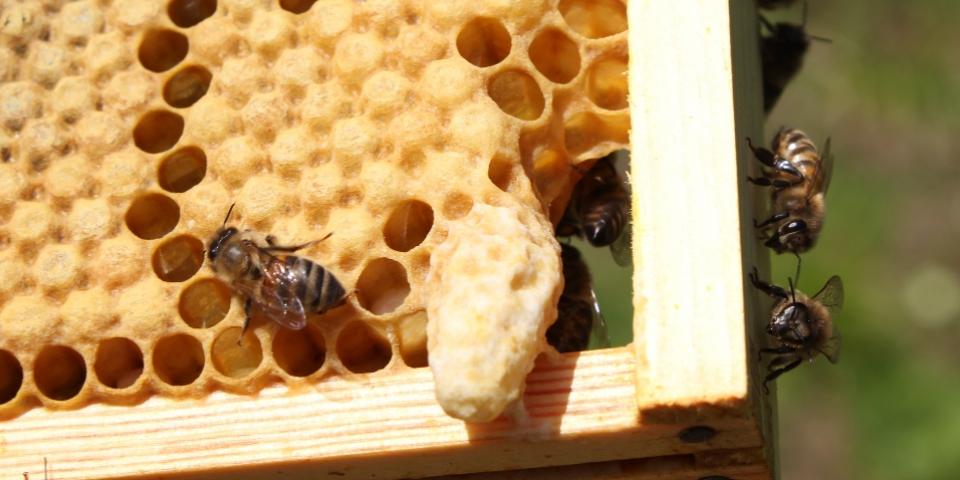 It's official... I've now experienced what it's like to carry out an artificial swarm. It's the one thing I've been dreading since becoming a beekeeper in 2016. You read about it in books, you watch videos and practice. But when it comes to doing it, everything seems to be forgotten and you're left there wondering what to do while thousands of bees fly around as you disrupt their home!

After inspecting two of my colonies, I had just one more to do - the strongest of all of them. This particular colony is on double brood to give the bees plenty of space as the queen is quite a prolific egg-layer. Having removed the super and queen excluder, I removed the top brood box and left to one side while going through the bottom box first. All the brood had emerged just about and worryingly I didn't see any eggs (or queen) but plenty of bees. Putting the second brood box back above, it was a repeat performance. Thankfully there were 1-3 day old eggs as well as brood, but still no sign of the queen. As long as there are eggs, it's OK not to see her, especially as there were no signs of any queen cells.

Popping the queen excluder back, I thought I'd just take a quick look through the super because she had previously been up there. First couple of frames were filling up nicely with nectar and the capped brood on the next few frames had emerged. What I wasn't expecting to see was a capped queen cell and one other charged queen cell containing a larvae in royal jelly.

Having not seen the queen, I had no option but to go back through the two brood boxes again - and the super if I didn't find her. So I moved one brood box way to one side while I worked methodically through the other, taking a couple of outer frames out and laying to one side to give me space inside the brood box to separate the frames. With so many bees, I was almost certain the colony hadn't swarmed. A trick to find the queen with so many bees is to create a big gap in the brood box, leaving for 15-20 minutes and the bees will go towards the frames where she is. As I hadn't seen her, I went over to the other brood box and started going through meticulously looking for the queen. At last, there she was with her bright yellow dot glaring back at me. How had I missed her first time round?

As the queen cell was in the super, I decided that it would be OK to leave the brood boxes on the original site as one was basically empty anyway for the queen to lay in. While back on the new site, I left a new brood box above a new floor with the super full of capped brood and queen cell above before popping a crown board and roof on top.

I must confess to mild panic setting in at the time all this happened. Why had the bees drawn out queen cells in the super? Having thought about it sitting here at home with a cup of tea I'm pretty sure this wasn't swarm preparations but more because the queen's pheromones hadn't reached all the bees. I say this because the colony is on a double brood box and those nurse bees up in the super looking after accidental brood in the super may have been missing her presence and thinking she was no longer there. When that happens, if there are 1-3 day old eggs (which there was), then they will raise a new queen.

Tomorrow I'll head back up to the apiary to check all is well and feed light sugar syrup if either colony is low on stores. With the next couple of weeks looking warmer hopefully the bees will be gathering nectar and pollen in sufficient quantities and I can start to stand down doing weekly checks on their level of stores. On my next inspection I'm expecting the new virgin queen to have emerged. If she has and looks healthy, then I will remove the other queen cell.