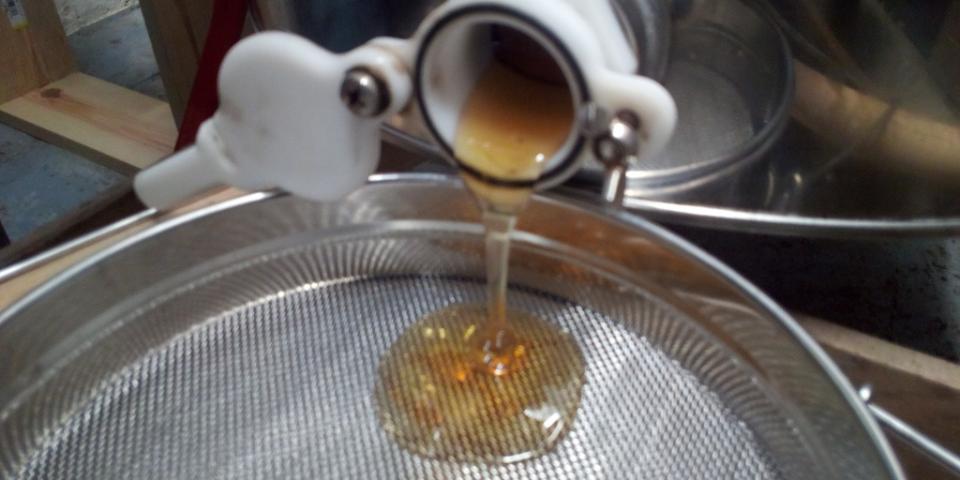 For some beekeepers, the honey crop seems to be the most important goal of their beekeeping year but for me, I only take any surplus honey leaving a good store of honey for the bees. This year was no exception. While others were taking honey off their colonies in the springtime, I chose to leave their stores. There's good reason for doing this and it's all about the changing climate and helping the bees to get through their year.

Early on in the year you may recall that it was quite late in the beekeeping season before we could open up the hives. This meant that the bees were relying on their winter stores to see them further into the English spring time. Weighing each colony weekly, I could guage how much stores each of them had and where they seemed light, only then did I feed them fondant - and a small amount at a time so that they didn't store.

As soon as the weather was sufficiently warm for the bees to forage, they were out gathering new stores to replenish their empty larders to feed themselves and the next generation of bees. This time was short-lived because the June gap was only a few weeks away. A whole month where there's a dearth of food for the bees. All my colonies had good healhy stores and it's at this point I chose not to take any. When a beekeeper removes stores at this time of year, they really have to be careful to not let their colonies starve. Personally I find it quite brutal removing their stores, especially when all the frames are removed and they are left without sufficient food. Beekeepers can then find themselves having to feed their bees. Is this not counter-intuitive?

So here I am in August with 12 colonies (8 new colonies from swarms). It won't be until next year that these eight colonies will produce any surplus honey as they first have to establish themselves and become strong colonies. Out of the four established colonies, only one of them has provided surplus stores which I can remove without putting the colony in any danger of starvation as they move into their winter preparations. This colony ended up with four supers above the brood box, one of which I left for the bees.

Throughout this year, I've had a lovely bee buddy to work alongside. With 11 years of beekeeping experience, Jan has such a wealth of knowledge and I have been learning so much from her. It has boosted my beekeeping tremendously. There have been times when we have both stood peering into a colony and saying we know absolutely nothing about beekeeping! This year there seems to have been an exceptional number of swarming queens - hence how I have ended up with so many colonies this year. You have your plan of what you intend to do during your weekly inspections. Get to the apiary, open up the colony and there you stare down at all the charged queen cells. Nuc boxes are a saviour!

I'm digressing slightly, so back on topic... removing my supers. Normally I remove the supers from the hive, take them home, individually uncap each frame with an uncapping fork and then place inside my extractor and manually turn the handle. There's a bit of an art to extracting the honey - spin too fast and the comb can fall apart. It's time-consuming, but it's also a bit of me time that I enjoy. This year, Jan asked if I would like to take my supers over to her and show me how she extracts her honey. Jan has more colonies than I do so she has an electric extractor and rather than using an uncapping fork, uses a heat gun to remove the cappings. It's not until you experience this way of extracting, that you realise how super efficient it all is. What's more there's less mess to clean up afterwards. I'm hooked!

Three supers - 55lb of honey. Am very happy with that and know I made the right decision to leave all the excess stores the bees had made in the spring.