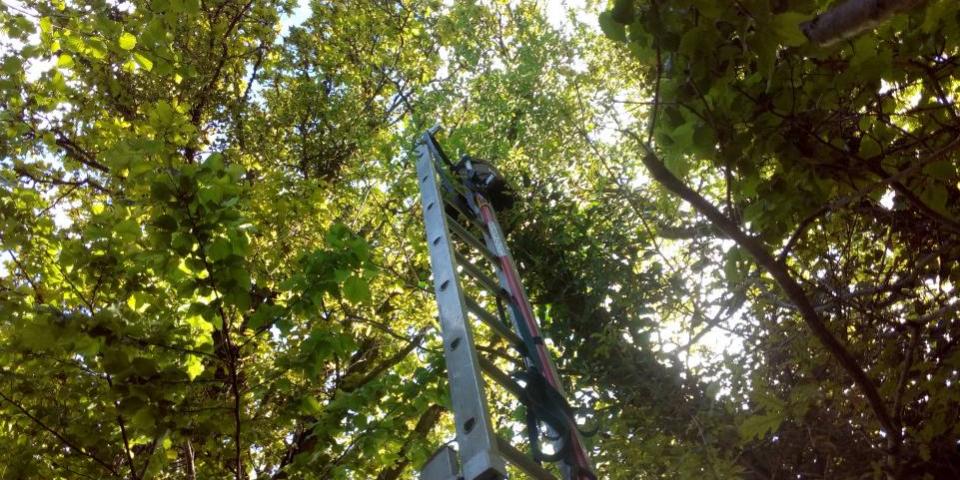 Three years ago to this day was when I officially became a beekeeper. It hardly seems like yesterday but here I am with five colonies, a couple of nucs raising new queens as well as a couple of beekeeping qualifications along the way. So, how have I been spending the day?

After running my partner to the airport first thing, it was a quick change into a beesuit to help my beekeeping buddy Jan with her bees. She knows better than to go away for a week's holiday in May, but in a moment of madness last year, she booked a holiday in Morocco to go and see more bees! In her defence, the weather hasn't been great here in East Devon and it's kept the bees in - that is, until this weekend with temperatures around the 15-17oC mark. Just the right conditions for swarms.

Having chatted last night, we assessed each of the swarms and worked out our plan of action for today. Beekeepers seem to have a talent for practicalities and pull on their resources to find ways of catching swarms that are just a little too high to safely go up ladders. Even when there are two of you, our first priority is our own safety.

Jan had a telescopic fruit picker which would have done the trick if only the net on the end wasn't the size of a fishing rod - remember those that we used to go collecting tadpoles with in ponds as a kid? Twenty minutes later we had rigged up an old 5 litre plastic bucket tied to the top of the telescopic pole with ratchet straps. Turned out to be perfect for placing just underneath each of the swarms and giving it a quick jerk upwards for the bees to fall into. We took it in turns with one of us shaking the bees into the bucket while the other stood a little way to one side to grab the bucket as it was lowered to one side and then tip the bees onto a sheet on the ground with a skep in place for the bees to walk into. For one of the swarms we even watched the queen go inside with the rest of the bees following her.

One swarm was too far out of reach - about 20 feet too far - but again we were resourceful. Bees will walk upwards into dark spaces so this time, instead of a plastic bucket on the end of the telescopic pole, we tied another skep on the top. With a few branches sawn off and a long ladder leaning against the trunk of a tree, we hoisted the makeshift swarm catcher so that it was above the swarm. All we could do was wait to see if they would get the hint and walk inside.

With the swarms in their skeps and one being coaxed into one, I headed off to do the weekly check on my own colonies. A virgin queen had emerged from her queen cell in one of the nucs so now it's a waiting game while she prepares to go on her mating flights and come back safely to her colony.

We did good today. We worked hard, we got resourceful with what we had to hand and we pulled it off.