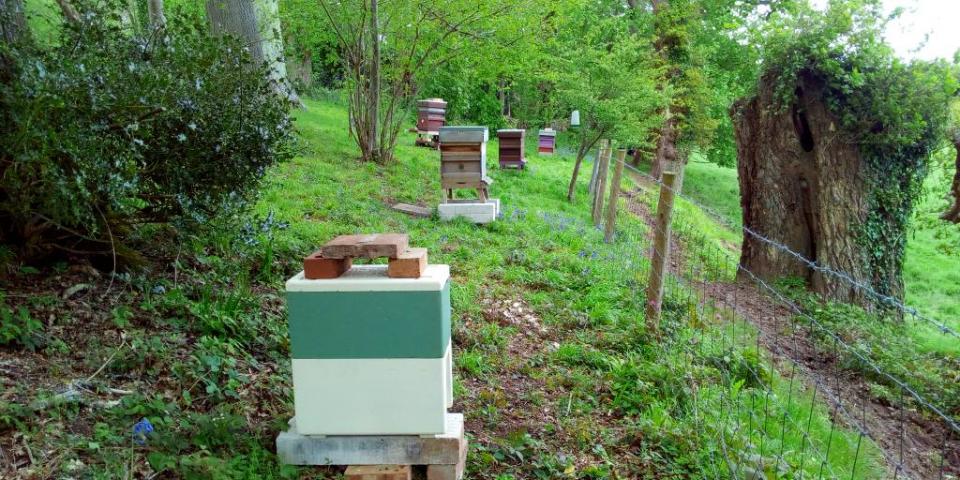 Am quite pleased with myself this weekend. I managed to prevent one of my colonies from swarming. The weather wasn't great but knew if I left this particular colony any longer than my regular 7 day inspection routine, then the chances are they would swarm. The queen has been busy expanding the size of the colony and at some point they would be making swarming preparations. I waited until mid-afternoon when the weather brightened up and went to take a look. Within a week, they had drawn out some queen cells and there sitting at the bottom were tiny larvae sitting in pools of royal jelly - a substance made by the workers which is richer in content than that fed to the normal bee larvae. It is at this point that a queen cup becomes known as a charged queen cell.

I think it was because I was expecting this to happen that no nerves kicked in. Instead, I placed alongside the spare poly nuc box I had taken with me and systematically went through each frame looking for the queen. Carefully taking the frame I found her on and putting it into the nuc box, I knew I could now work through all the frames to check them for hidden queen cells without harming the queen. Two of the queen cells had already been capped within the week since my last inspection. There could easily be queen larvae in there, but it's possible that a worker could have been in there cleaning the cell and been sealed in. For this reason, I removed those two queen cells.

Quietly (well, talking quietly to myself) I marked the frames I found charged queen cells on and noted those where queen cups were. Each queen cup I checked to make sure there were no eggs in and left them. Picking the best charged queen cell, I removed all the others. That frame I made sure to put back in the colony gently. Taking another two frames from the original colony, I shook only the nurse bees into the poly nuc before adding a further frame containing stores and pollen and filling the rest of the poly nuc with frames of new foundation. With the lid on, I moved them to the other side of the apiary. It doesn't matter if there are any flying bees in the poly nuc because they will fly back to the original position of their hive. That just left me to close the original hive and leave the bees to raise their new queen.

It's always a good idea to go back after a few days to check how the queenless colony is doing to check the queen cell is doing OK and to do a thorough check for any new charged queen cells. The aim is to leave the colony with one queen to raise. This will prevent the colony from casting when more than virgin queen emerges which will deplete the colony size drastically. With the queen in her new residence, if all fails, she can always be united back into the original colony if the new queen doesn't mate properly or is lost on her mating flights. It's now a waiting game, so fingers crossed the new queen emerges and she returns back to her colony safe and sound.