Skip to main content
Home | Overwintering bees... when to put your feet up

Overwintering bees... when to put your feet up 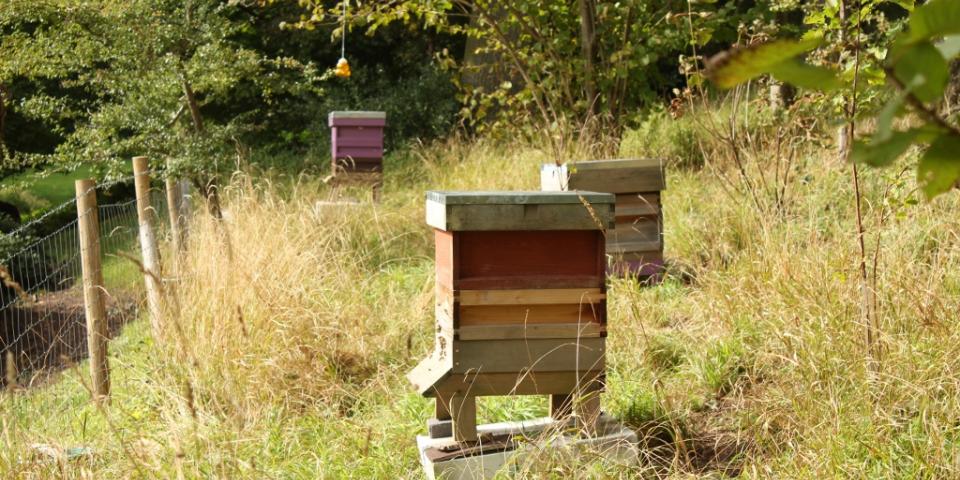 It's that time of year, when the clocks have fallen back and the nights are beginning to draw in and it begins to feel like winter is almost upon us. The days have a definite nip in the air and so the bees themselves will be starting to hunker down themselves as they start to cluster for warmth inside their hives.

At this time of year, as a beekeeper, we can start putting our feet up - well at the apiary itself - as there's plenty of work to be done in getting the equipment ready for next season.

So what's to be done to get the bees through winter?

Preparations for overwintering starts straight after the main honey crop in July after the supers have been removed and any varroa treatment has been carried out. I like to leave a super of stores for my girls, but other beekeepers remove all the honey which means the bees are deplete of their winter larder and need to be fed to increase their stores.

The best colonies to survive winter are those that are led by a young and healthy queen. Old queens may die over the winter months leaving the colony queenless. In this state, the workers themselves can become drone layers. The queen herself may also stop producing sperm and become a drone laying worker (drones being the boys in the colony).

This is the time of year when beekeepers unite small or weak colonies to help them get through the winter into the spring or requeen a strong colony from a queen that has already mated and laying in a nucleus (5 frame hive).

After the honey crop has been removed, this is the best time to treat the colony for any high levels of varroa mites. Leaving them untreated, the varroa will carry on breeding and as they are a parasitic mite, the winter bees' lives will be shortened leaving the colony short of bees in the springtime and weakened. In such a state, they are prone to disease caused by the varroa, such as deformed wing virus. Here in Devon we have late flowering Himalayan Balsam, and with the weather being warmer, the bees are out foraging late into September/early October. This year I've checked the varroa levels again and have found that I need to treat the girls yet again to try and combat the number of varroa mites. Sadly there is no remedy, it's something beekeepers have to monitor and try to control.

October time is when we put mouse guards on as the little critters like to make their way inside hives because it's nice and warm. And to protect the colonies from the outside, some beekeepers surround their hives with chicken wire where they are troubled by green woodpeckers who like to tap their way into the side walls of hives for a meal.

If beekeepers have removed all the honey, then it's up to the beekeeper to replace it with a feed of sugar syrup made up from 2 kg sugar to 630 ml water. On average a colony requires 45 lb of stores to get it through the winter and this has to be achieved by the end of September before the weather starts to cool. As it cools, the bees are less inclined to go up into the feeder to bring down, invert and cap into stores. Any uncapped stores could potentially ferment which could lead to dysentry in the colony.

October is a good time to check the condition of the hives making sure they are weather-proof and there are no gaps which would cause draughts are pests to enter. With open mesh floors, there's no need for extra ventilation, but some beekeepers keep their bees on solid floors and place matchsticks under the corners of the hive roof to allow the flow of air through the hive.

With the stores all in, the beekeeper needs to know the weight and by lifting each side of the hive, get to know the feel of how much stores are inside. In fact, as the cluster of bees moves inside to feed, the weight changes so it's a way of knowing where the bees are.

If the hives feels light, then the beekeeper can feed fondant to the bees. There's no need to open the hive itself, but this can be fed through the crown board that sits below the roof through one of the two feeding holes, depending where the colony is.

All through the winter months, there's no need to visit the apiary every day, but to regularly visit to make sure hive entrances are clear, no branches fallen on the hives, been knocked over and there's good ventilation all around each hive.

There should be no reason to open a hive during the winter months. Unless you suspect there's a problem with the colony, such as a disease, or the colony is not feeding. If it's too cold, the cluster may not move towards food and this is known as isolation starvation. All the beekeeper can do, is open the colony quickly to spray a very light syrup over the bees to encourage them to eat. You can also put a frame in alongside the cluster that you've filled the cells with syrup for them to take hopefully.

With all that done... you can then put your feet up!