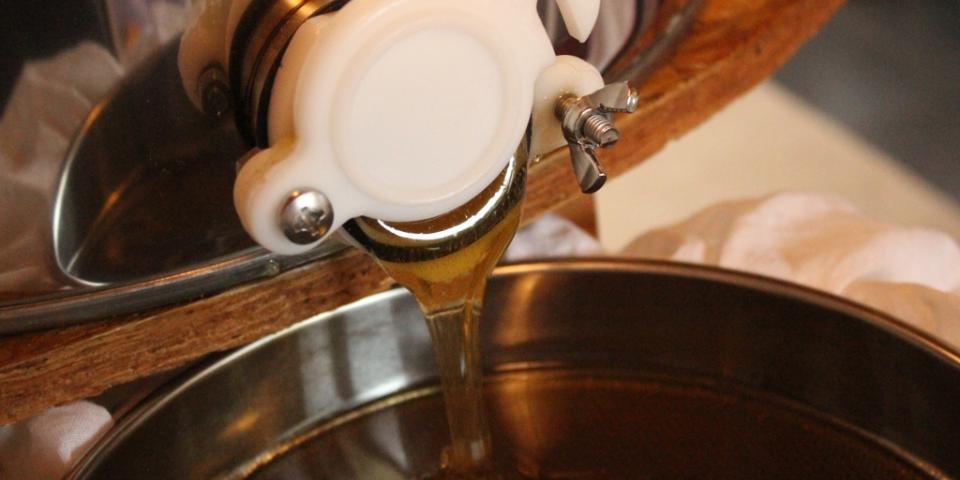 With the sweltering heat of the summer, the last thing you want to do is put on a beesuit, but the weekly inspections must carry on for a little longer to make sure there's ample space for the queen to lay as well as ensuring there's sufficient space to prevent the colony from getting congested - one of the main reasons why a colony will swarm is not having enough room. However, with a good nectar flow on, the girls are busy bees and there's an abundance of honey being made. That means lifting off very heavy supers to reach the brood box!

The supers are weighing about 20-30lb each and are almost ready to be removed. Once the bees have reduced the water content down to around 18% and the nectar is capped with wax then excess honey can be taken without any detriment to the colony itself. You need to remember that a colony requires on average 40-45lb of stores to get through the winter, so always make sure they have this by the beginning of October. I never remove all the supers from my colonies as always feel that they've worked very hard and what better food for the bees than what they have produced themselves which is full of goodness rather than supplement with sugar syrup (unless absolutely necessary).

Each of my hives now has 3 supers stacked on top of each other and as fast as I'm removing one, the girls are busy filling the replacement super I leave for them. When clearing the bees from a super, I use a clearing board fitted with a Rhombus bee escape and leave for 24 hours. Below the super being emptied of bees, I leave another super below to give them the same amount of space to avoid the congestion I mentioned earlier. It also gives them something to to - build wax during a nectar flow - so it can be used later.

The first crop of honey each year is rather special. It's a time to take things slowly and enjoy the moment. I like to remove the wax cappings with a wax capping fork. Yes it's slow but very satisfying. With four frames uncapped, I can begin to spin out the honey using my extractor. Looking into the extractor as I turn the handle, the honey starts to spin out and slowly makes its way down the sides of the extractor into the holding tank below, going through a filter on its way. When all the frames have been spun out, they all go back into the super and given back to the colony they came from to clean up and carry on filling again.

Later in the day, I filter the honey out of the holding tank through a fine sieve and muslin cloth and into a large bucket where it sits in the warmth of the day to let the air bubbles rise to the surface. The smell of the honey is wonderful and a dip of a finger into the bucket to taste is just something I couldn't resist. There's no greater flavour than honey made by your own bees from the wonderful flora around where you live.

And there's more to follow! The bees are working the lime trees at the moment as well as brambles and privet. Already the sweet chestnut trees are beginning to display their catkins which will be full of flowers for the bees to forage on... and not forgetting the Himalayan Balsam along the riverbanks and surrounding areas. Love it or hate it, the bees themselves find it highly attractive as a source of nectar.