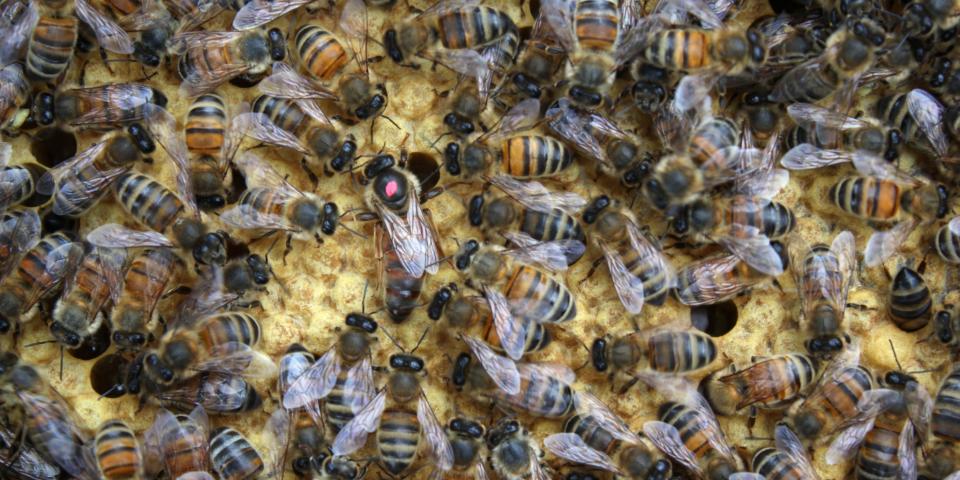 After two weeks of searching for her Ladyship and beginning to wonder if she was really in there, I finally got to meet Lizzie for the first time on frame 9 out of 12 while systematically going through the brood box this afternoon. What a very special moment to see her and an enourage of attendant bees surrounding her. With press-in queen marking cage and marker pen to hand, I wanted to mark her as quickly as possible without causing her any harm or stress. In fact, I think I was stressing more because trying to manipulate the cage, hold the pen and hold the frame in place proved just about impossible. In the end, resting the frame she was on sideways on top of an empty super to avoid squashing any bees, proved more successful while I dabbed her. She's now proudly wearing a red dot (the supplier had run out of white marker pens for this year's colour marking code) which will make it so much easier to spot her next time.

So, how's it been since the girls moved in? Well, it hasn't been too bad other than to say her Ladyship managed to squeeze her way through the queen excluder and had been busily laying eggs in the drawn out comb the workers had been rather prolifically building in the week that followed their arrival. When looking at the colony for the very first time, it wasn't what I was expecting to see to be honest. The panic did set in a little, but having chatted to a few beekeeper friends who all had different views on what I could do, I decided to encourage the bees with a gentle brush down back into the brood box. Not seeing her Ladyship, I was worried that I might harm her or miss her, or even worse, lose her somewhere. But once you commit yourself you have to see it through. The super had capped cells so with a bit of luck Lizzie was back downstairs and with the excluder back in place, emerging bees from the super could travel down and the super eventually be clean of eggs and used again for stores. Just as a precaution I added another super on top in case her Ladyship managed to squeeze her way back up again so that there was sufficient space for brood and stores should it be needed.

That was the plan five days ago and with the weather being lovely and warm today, it was ideal to check how things were inside the hive and see if the plan had worked.

Off came the roof and the extra super had no drawn out comb on any of the frames. Going down another level there was definitely less bees than last time and it had looked like some of the bees had hatched with some of the frames being decidedly quite heavy - was this honey stores in the making? I don't know. Something I'll learn on my beekeeping journey.

What I did spot were three queen cups. Apparently, I've been told, the girls like to make these acorn-cup shaped wax cups to practice. They're sometimes called play cups. The thing is not to panic as it's entirely normal for the bees to make these. The advice I was given was to check inside them and if there was any sign of an egg or larva then it is likely that the wax will be drawn out to form a queen cell so to keep an eye on them.

The brood box was the final set of frames to be checked and all seemed to be doing well in there with frames 5-9 heavy with brood. It was on frame 9 that I first caught a glimpse of Lizzie. I could hear myself squeal with delight! Having now marked her, a tip to any new beekeepers thinking of buying something to trap your queen while you mark her, don't waste your money. I paid £12 for a crown of thorns type wood/metal cage and ended up letting her wander and just dabbed her gently with the tip of the marker pen. So much kinder, less worry of thinking you might harm her and certainly less stressful for the beekeeper!