Jobs in the apiary and a surprise find 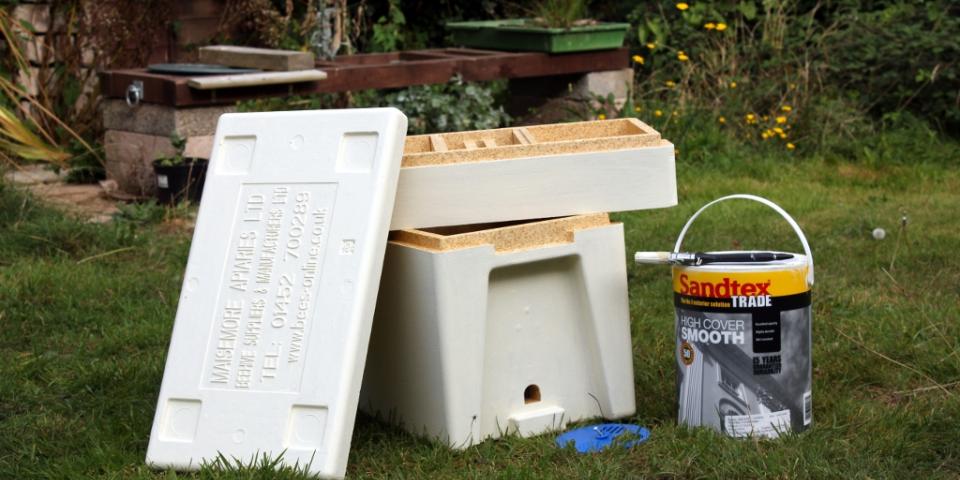 With the arrival of September, came the seasonal change as well taking us into Autumn which means beekeepers are turning their attention to winter preparations. Hard to think about, when looking out of the window on a gloriously sunny day, that soon my colonies will be clustering inside their hives trying to keep warm and sustain themselves through to spring.

Since removing the excess supers of honey in July/August, I've been keeping an eye on the amount of stores in each of the colonies. Each colony has had a full super left for them and with it still being warm enough for the bees to fly, they have been out and about. I'm lucky enough to live in a part of Devon where there's an abundance of Himalayan balsam growing along the river banks and this has provided some extra stores for them. However, the shortage of food generally since the nectar flow means that if they don't find enough food, then they start to use that which is intended to feed them through winter. Every weekend I go and visit my colonies and can see just looking on the ground below each hive that the girls have been uncapping their stores to use. This weekend I'll be hefting each hive to check their weight and if necessary will give them a feed.

Others jobs up at the apiary have been to generally tidy up and monitor for signs of Asian hornets now that it's no longer when or if they arrive - they are in the UK now and knocking on Devon's door with two new sightings in Cornwall and unconfirmed sighting in Dorset.

One other job I was not looking forward to doing was deciding what to do with a queenless colony. At this time of year, weak colonies can be united with strong colonies but I just didn't know what to do with this particular colony. This colony started as a swarm I caught and for some reason they decided they didn't like their queen. One minute she was there, the next she wasn't. Anyway, I decided to leave them to get on with it and after weeks had gone by, I still hadn't seen a queen. Resigned to having to unite them, during a bee safari, our seasonal bee inspector declared he had found the queen! I was quite surprised yet happy at the same time to think that the colony would start building up. During subsequent inspections, it didn't take long to find out that she was a drone layer - presume badly mated. I've never killed a queen before, but the job had to be done. I thought I would give them one last chance and placed a frame of brood in all stages and left them again to get on with it. Up until this weekend just gone, I had given up all hope of them raising their own queen and had asked my local branch if anyone had a spare queen. One came to my rescue and everything was set for me to unite the new queen on Saturday... how things change!

Beesuited and booted I opened up the colony and thought I would just do one final check. Yes, you probably know what I'm going to say... eggs! And on the next frame I pulled out, there was this beautiful rather large queen. How on earth I missed her, goodness knows, but there she was. Well, there would be no uniting now. Her laying pattern was just what you would want to see and now it's a wait to see if the larvae turn out to be drones or workers - I've got everything crossed that it's the latter.

The queen I was given is still in the apiary in an apidae where she seems quite happy with her small workforce. If I don't need to unite her then she'll be going back to her original beekeeper to overwinter until she might be needed in the spring.

With this turnaround, I've gone and bought my first poly nuc and on advice from a beekeeper friend, it's been given a couple of coats of masonry paint. I didn't know poly nucs would deteriorate so a good tip to paint! The reason for buying is to transfer the colony into a smaller box to overwinter rather than a full size National wooden brood box. The nuc means they will have less space to heat and the bees will use less energy on keeping their hive at the right temperature.

At the end of the beekeeping season, I'm now the proud owner of four colonies in my apiary!