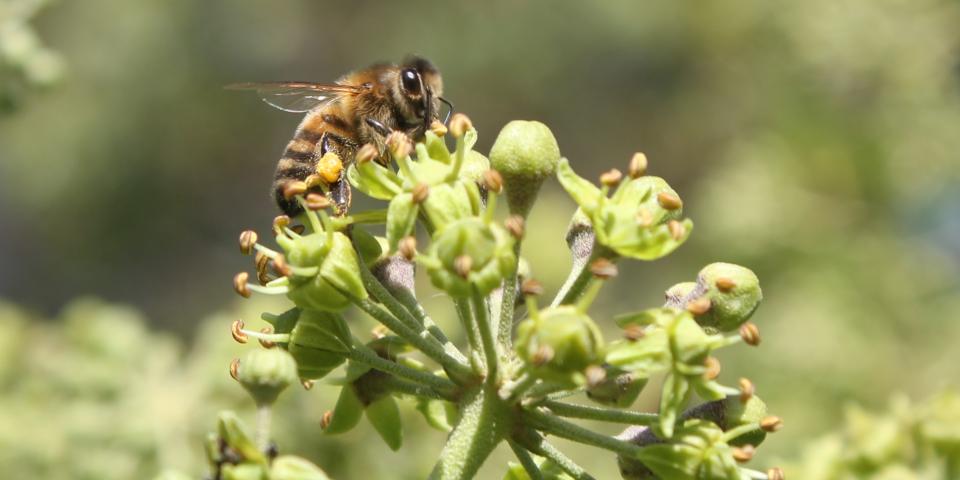 It's late September, the sun is shining and taking a walk around Budleigh Salterton, I don't have to go far before I see flowering ivy that has attracted a wealth on insects, including honey bees. This creeping plant, which produces flowers in the autumn, is the last source of natural food before the girls will start to hunker down for the winter months. Before setting off, I looked across at the hive and saw a lot of activity around the entrance which means they were on a mission to bring back stores for the colony. There was plenty of yellow pollen - an indication that the girls had found the ivy!

This got me thinking: How much pollen in weight does a honey bee carry when fully loaded?

Some of the bees bring in small amounts, while others are clearly fully loaded. Each honey bee gathers the pollen by putting it into little pollen baskets behind their hind legs. These baskets are called corbiculae and one bee can carry approximately half her own body weight in pollen.

It's also interesting that a colony works as one and when foraging, they don't randomly select flowers, but choose one flower source on any single trip and they will keep going back to that source until they have depleted the food supply. This is a great help to nature as it ensures that plant is cross-pollinated.

So today the girls have been out foraging on ivy and each honey bee will either be collecting pollen or nectar, not normally both. As each of them returns, they will unload both their pollen baskets into cells and any pollen that they may have on their bodies before heading back out again to the same spot.

Look out for the yellow pollen from the ivy in the video. The orange pollen is likely to be dahlias/daisies, and the very pale yellow/white will be Himalyan balsam. You can also tell when a honey bee has visited the latter, she is covered with white pollen all over her!

With the season changing, once the ivy comes to and end, that will just about be it when it comes to the girls being out foraging. They will now rely on their own store of honey to see them through to spring. I'm going through my first beekeeping winter with a bit of intrepidation because I'm well aware that seasons over the years don't to what you expect them to do, for example, who can remember walking around outside with T-shirts and shorts in December! When the weather is warm, honey bees will fly to forage for food. I'll need to keep an eye on the weight of the hive, and if it becomes too light, then it's a warning that the girls have eaten all their stores and in danger of starvation if they are not given extra food in the form of sugar syrup to see them through.

The image used has been published under the terms of a Creative Commons License and is attributed to HoneyBee.