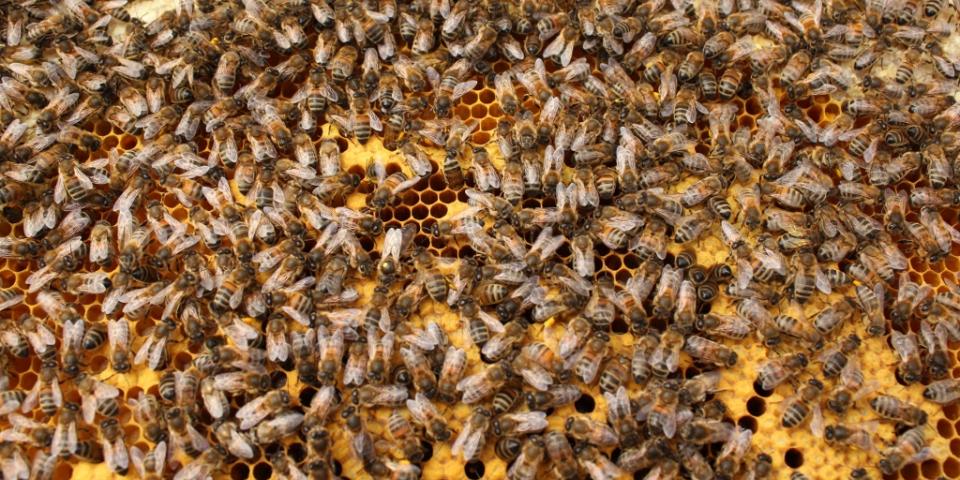 With the temperature in double figures today and the sun shining, the long-awaited first spring inspection of my three colonies happened today. There's a whole raft of emotions I found myself feeling as it's been about 7 months since closing them up for the long-drawn out winter months. I felt excited to be getting back to my beekeeping and opening up the hives, but at the same time feeling anxious as to what state the colonies would be in after the endless months of cold weather.

This was only going to be a quick (famous last words) inspection to check there was brood in each colony and to look out for the queen at the same time as well as remove the over-wintering supers I have under each brood box (called 'nadiring') and place them back above the brood boxes.

Watching each of the entrances before opening them up is a great way to have an idea of what the bees are up to. Two colonies were extremely busy bringing back bright yellow pollen from the pussy willows that are in flower along the old railway track. There was less activity going on in the middle colony, which could indicate something is wrong.

The first colony I opened was so calm and the bees were walking over the brood frames nice and slowly. In fact, they didn't need any smoking. There were only four frames of brood as the others were heavy with crystallised ivy honey. Not expecting to need new brood frames on the first inspection, I took out a couple of these frames of stores and added replaced with drawn super frames next to the brood nest. At least it will give the queen somewhere to lay. If (and when) the nectar starts to flow, the bees will draw out extra comb underneath these short frames if I don't replace them before then. It's a great feeling to see the queen after such a long time and there she was wearing her bright yellow spot on her thorax!

Moving on to the second colony (the one which didn't have much activity going on at the entrance). There was a definite roar of bees as the crown board cracked open above the brood box. With a little gentle puff of smoke, I lifted the crown board, turned it over to check the queen wasn't there and put it to one side. I could hear the bees and sensed they might be a little 'tetchy'. Gently smoking them down, it seemed to make them roar a little louder. At this point I'm wondering if I should carry on, but decided to see how it went taking out the brood frames. The bees were not happy at all, but I did see the queen and counted the number of frames where there was brood. I decided it best to close the hive and try another day. Last year this colony was beautifully calm, so it could just be the terrible weather we've had for so long. With the weather set to improve over the next couple of weeks, I'm hoping their temperament will be restored.

One more colony to check. Now last year, this was the strongest colony with a very prolific egg-laying queen as well as producing four supers full of honey! Being so prolific, the colony ended up on a double-brood box. Being so strong, at times it did feel quite overwhelming doing weekly inspections. I must confess to being very nervous about opening this colony because of how they were last year. I needn't have worried at all. They were a pleasure to open and although I didn't see the queen, there were seven frames of brood with day old eggs - a very good sign that she's around.

Job done! Thanks to Dave, my partner, for coming along to give me a hand and take the wonderful photos.