Skip to main content
Home | December... a time to relax and reflect

December... a time to relax and reflect 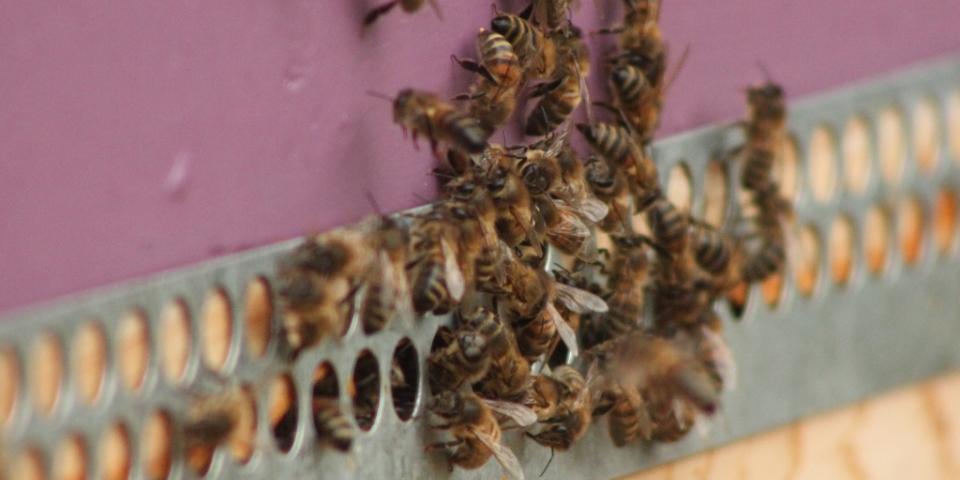 This is my first winter as a beekeeper and I've been attending all my monthly branch meetings during the year, reading up on bees and what the beekeeper can expect in December in the many beekeeper diaries you read both in books and online. Quite a few said it's a time to relax, put your feet up and enjoy the season's festivities before getting back into the swing of routine inspections and hopefully extracting honey later in the year - if we've looked after our bees well. Having said that, it's obvious that the bees themselves have thrown the books out and have other plans of their own. Just like this photo of my bees out on Christmas Day.

For some time I've been aware of the changing climate and how it has a knock-on affect on everything around us. The seasons seem out of sync, or not as cold as they were, which means that my girls haven't done what the books say they should be doing. Yes, Lizzie and her family have reduced in size to form their winter cluster, and according to what you read, they will be staying inside the hive until the warmer weather - only coming out on cleansing flights, undertaker duties or water gathering, when weather is warm enough. December, here in Devon, has been another mild month so the girls have been out in large numbers on foraging flights. Some managing to bring back pollen - orange, yellow and off-white - when there is barely anything in flower at the moment. Having been out on a few walks, there is gorse out in flower, mahonia in gardens - even notice the eucalyptus tree in the garden is also flowering out of season. With so little around, the bees are using up vital energy and will be relying more on their stores, so I've been regularly hefting the hive to check the weight. This is all new to me and keeping bees is all about learning - constantly.

Early on, I decided that keeping bees was more for their benefit rather than mine, so taking all their hard-earned stores and feeding them fondant to replenish their stores for winter really didn't appeal to me. Looking back through the year, I really wasn't expecting to be extracting any honey at all, but the girls were prolific producers of honey and I took two full supers and left two supers (one below the brood box and one above the brood box) so that they could get their house in order ready to take them into winter and through to spring. Even after a circular from the National Bee Unit alerting beekeepers to start feeding fondant as there were reports of bees starving, the girls are still using their own stores. I admit, I panicked when I read the circular and bought a tub of fondant and gave it to the girls. Checking a week later to see if they had eaten it, I opened the roof quickly to see that it hadn't been touched and all looked well through the gap in the crown board and there was a good covering of bees on the super frames. Another lesson learned - trust your judgement.

Looking through my hive records since I became a beekeeper in May 2016, one thing I noticed was that I probably opened up the hive more than I needed and at the wrong time of the day. No wonder one or two of those on guard duty came to find out just what I was up to. Having said that, my bees are very calm and when stung (only about 3 times throughout the year), it's because I've mishandled them or done something to annoy them, rather than the other way round. It's all about taking what you have learned at your local branch apiary meetings and putting it into practice. Sometimes it feels like you've just passed your driving test and going out for the very first time - apprehensive about the unknown, but also very excited.

Even having a big crop of honey earlier in the year, I think the one thing I'm more chuffed about is managing to keep the dreaded varroa destructor under control. It could have gone so horribly wrong if, and I say a big IF, I hadn't been curious at the beginning of December to be inquisitive to know what the mite drop was at this time of year. I had followed the Integrated Pest Management timetable and in my little world, all was well with the girls. That all changed drastically when I pulled out the board and counted, and counted and counted yet more. In total... over 2,000 varroa mites. A valuable lesson learned - never take anything for granted. Check, double check, and triple check to be absolutely sure.

That was the most serious lesson I learned. It could have been very costly ending up weakening Lizzie and her family. Instead, here I am at the end of the year with a very healthy (and looking strong) colony as we head towards spring and the daunting prospect of learning yet more - plenty of time to practice my artificial swarm techniques.

Does anyone make new year resolutions? My own this year is to learn to read my bees more.