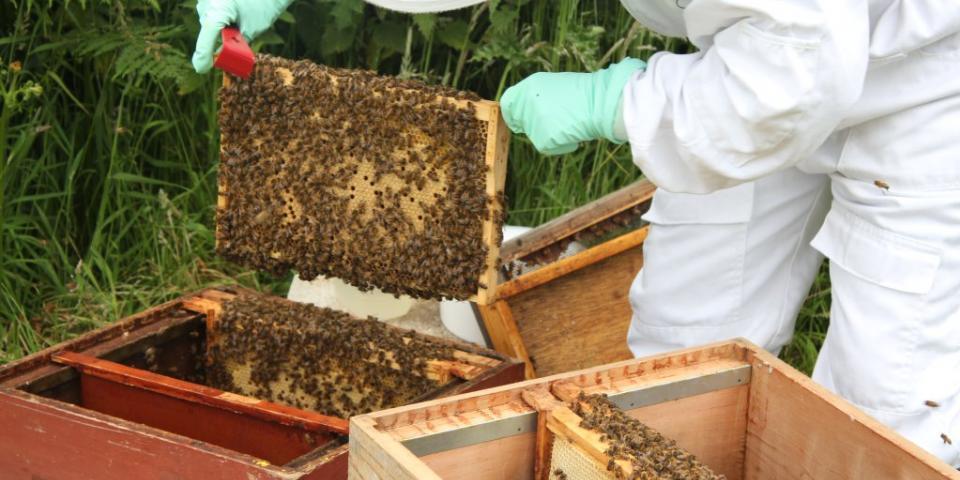 What with the beautiful hot and sunny weather we've been having of late, the girls have continued to head out and find new sources of nectar in and around their home. Mornings are a great time to watch them as the sun is low and it's easier to see them fly off into the distance. Equally, it's just as much fun standing outside beside their beehive late at night listening to the hum of bees inside as they work away in their world of darkness.

Today I had to do a little rearranging of supers because the girls have been very busy indeed and there's quite a surplus of honey stores, so a time to tidy things up a bit following advice from my mentor, David Packham, seasonal bee inspector for the Devon Beekeepers' Association.

Being in my first year of beekeeping, there's a lot of learning and challenges each time you take a look at the colony. Just when I think I have a plan, they go and do something different! Like her Ladyship Queen Bee squeezing her way through the queen excluder and laying eggs where the girls store their supplies up in one of the supers. Once you see eggs, larvae or capped brood there, it's a waiting game until the adult bees have all hatched before the bees clean these cells back out again ready to store honey. They also move their stores around too as they start to prepare themselves for winter. Of course, when the weather is cold, wet and rainy the girls don't go out if they can help it, other than to fetch water or go to the toilet, which means they start using these stores, so my weekly inspections are checking that they have enough food and I'm not taking too much that they will come to rely on in a few months' time.

On advice from David, I have put one super below the brood box. The reason for this is twofold. Firstly so that in the spring the queen does not move up and lay in the super and secondly because bees naturally store honey above their brood nest. This will now stay there until my first inspection in the springtime when the super will move back up above the queen excluder.

It seems that I may also have put on too many supers because not all the frames have been filled with capped honey. A good tip from David was remember over super in the spring, under super in the summer to avoid half-filled supers.

As the season turns to autumn, the honey bees that will emerge will be the winter bees which will see the colony through to the spring. Unlike the summer bees (who only live six weeks), these bees will live for six months going about their daily business inside the beehive. Already the drones (male bees) are being kicked out of the colony. Sad as it is, it's the natural flow of a colony's lifecycle. The main purpose of drones is to mate with queen bees in the summer, other than that, they do very little so when it comes to a colony trying to get through winter, anything that may jeopardise this, has to go. Sounds harsh, but bees have been doing this for millions of years.

With another 14 frames of surplus capped honey, the extractor has been borrowed again and is ready and waiting to get spinning later this evening!