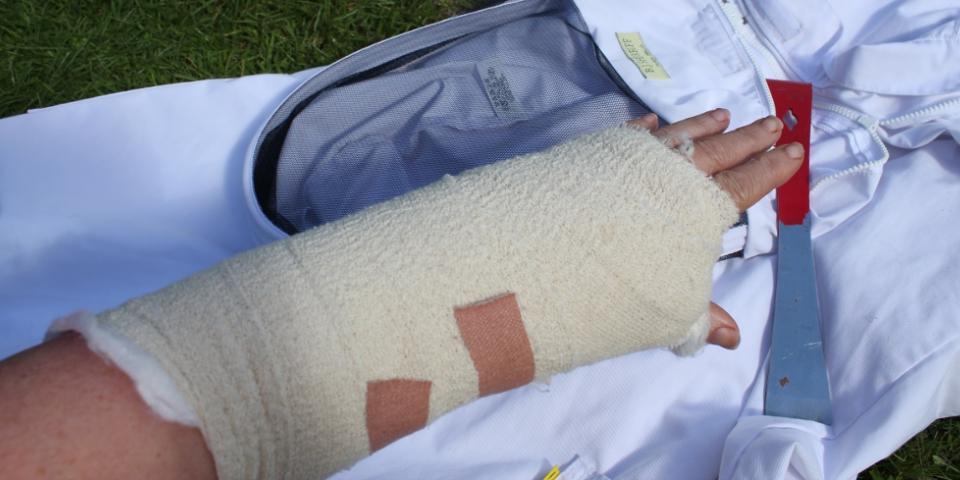 The months of June, July and August are a busy time for beekeepers. There are the weekly inspections of all your colonies to look out for signs of swarming and to take measures to prevent, such as doing an artificial swarm, so that your bees don't become a nuisance to any neighbours. We also need to keep on top of the varroa mite levels in colonies, which is a constant battle, as our honey bees Apis mellifera have no natural defence mechanisms and could very easily succumb wiping out whole colonies.

As July comes to an end, we'll be taking off the last of the supers full of honey (unless near a heather crop) to extract ensuring there is sufficient honey stores left for the bees while they forage the final nectar sources of the autumn season in readiness for clustering inside their beehives during winter.

That's the plan... but who should go and trip up, fall badly and end up with a fractured left hand (scaiphoid to be precise)? This is not a good time for one arm to be strapped up in a sling, making it just about impossible to do any beekeeping. Since the beginning of July, life as a beekeeper has been extremely challenging - as has the one-fingered typing. Before I go on, I would like to say a massive thank you to my beekeeper friends Cathy, Imogen and Patsy who have all helped me get through this part of the beekeeping season. As if they don't have enough to do themselves, they gave up their time to help with my bees.

It's been a while since I last wrote and since then, I'm pleased to say that the swarm picked up at the end of May from Sidmouth has a laying queen. She was a virgin queen and I was beginning to think that this little colony was queenless. Then on Thursday 13th July I went up to the Des Res apiary with Imogen to inspect the bees and who should we see, but her Ladyship walking on the crown board - good job we looked before we put it down by the side of the hive. Both Patsy and myself took a look the following week and there are frames of beautifully laid capped worker cells, just what you want to see as the queen builds up her colony of winter bees.

Meanwhile, the other two colonies up at Des Res were united successfully at the beginning of July and the colony is expanding nicely and are very good tempered.

As for my bees here in the back garden... I took the decision to move them as the colony was on a double brood and a very strong colony. The neighbours on both sides had been bothered by bees and as a responsible beekeeper, I felt the right thing to do was to move them out of the garden. I hadn't been up to any antics at this point, so with the help of my partner Dave, we got the girls ready and moved them late one evening at the end of June over 3 miles away with a plan to move them back to Des Res in July - all best laid plans and all!

At the time of the move, we split the colony into two and left them to settle into their new surroundings. Lizzie is a prolific layer and with Cathy's help a couple of weeks later after my fall, we checked all was well in her colony. The girls hadn't wasted any time either on finding a good nectar flow and a week later we were back taking off one of the supers and putting a clearing board on the split colony to take a super off that one too a couple of days later. Looking in on the split colony, their new queen had emerged so we left them to get on with it rather than disturb. Hopefully the new queen will have been out on mating flights and will start laying (if not already doing) - fingers crossed.

During the year so far, Lizzie's colony hasn't made any swarming preparations. They didn't last year either. Cathy thinks I should raise new queens from her... an aspect of beekeeping I haven't thought about, but might try queen rearing next year.

Well that about sums up what I've been up to over the past couple of months with the help of good beekeeping friends.