Skip to main content
Home | Back to the fuchsia

Back to the fuchsia 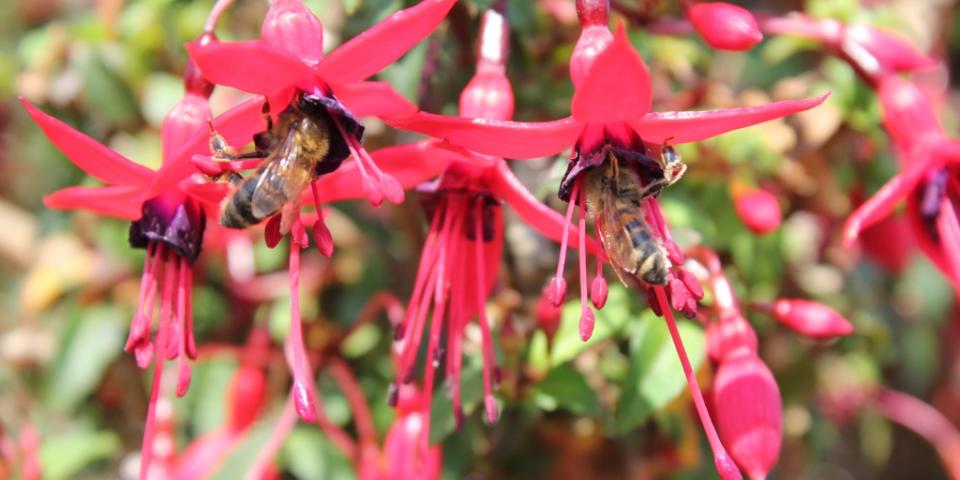 The weather this bank holiday weekend has been exceptionally hot, giving the bees a welcome break from the bad weather we've had for most of the month, to get out and forage. With it being so changeable, the bees have depleted their stores that they've been working hard to build up to see them through the winter. But they're out in force now bringing in the nectar!

This morning I set off nice and early to take a six mile round trip to the shops along the old railway track leading from Budleigh Salterton to Exmouth with Paddington, our year-and-a-half old dog. We hadn't gone far - just around the corner to be precise - when I saw ahead of us a cloud of honey bees crowding a gorgeous pink fuchsia hedge. There were literally hundreds of bees working the flowers and it was only 8.00am.

I didn't have a camera with me, so having returned from the shops, I dropped Paddington back home, picked up the camera and went back to the fuchsia hedge to take some photos.

So what's been happening this month? Well, my left hand is now strong enough to get back to beekeeping. Lifting off supers to inspect the girls was just not possible with my hand in plaster, so I'm thankful for the help (and patience) from beekeeper friends - Cathy, Imogen and Patsy - during this very difficult time for me.

Yesterday I nipped up to the apiary with a plan to open them all up and check how the colonies were doing and assess the level of stores. Dalditch was the first and the colony is a real pleasure to open. They are coming along well and are now on eight frames, having built up well since they arrived as a small swarm earlier in the year. With only two frames of capped honey stores in the super, I gave them a feed and will be feeding regularly now so they have a good store of honey to take them through the winter.

Moving on to Manston, it was clear after opening up and getting as far as four frames in, that the colony wasn't happy. They were certainly pinging my veil and one of the girls managed to sting me on my right wrist, which of course then attracted a few more girls my way. I was already hot and bothered with the temperature in the mid-morning being high, that I thought it best to close up the hive. Normally, this colony is also very good tempered. I briefly saw the queen and am wondering if it was a lack of food as they too were low and maybe making them a little grumpy. I also gave them a feed before moving on to the third hive - Moormead.

Moormead used to be in our back garden at home but grew into such a large colony and were becoming a nuisance to the neighbours, that I moved them away with a plan to bring them back to DesRes after a month away. Best laid plans and all... that had to wait until my hand had recovered sufficiently for me to drive to transport them. To cut a long story short, they moved into DesRes last weekend and had been left a week to settle in. I went up the following morning to check and saw it hadn't taken them long to find sources of nectar - one colour of which was bright orange/pink. I wondered at the time what plant it might be from, thinking it might be fuchsia. Still not sure, but it was such a vivid colour.

Despite splitting this colony in half, leaving the other half to raise their own queen, sadly she became a drone layer having not mated well. The timing wasn't great, but due to me being out of action for a while, I didn't get the chance to get in as many weekly inspections. During this time, the weather wasn't great, so I can only assume that the new virgin queen didn't get out on many mating flights and therefore was only laying drones. So, having sought advice, I shook the flying bees out for them to beg their way into other colonies. As for the drones... well, it's that time of year when colonies are kicking out the drones, so nature is taking its course.

For the time being, all I did was check the stores in Moormead. As it's still a strong colony, they have been working hard to bring in stores to sustain themselves. They still have two almost full supers above (having me taking two off earlier in the year) so seems they are doing fine at the moment.

About three weeks ago, I extracted those two supers. I didn't let the hand injury deter me! Now all that's left to do, is pour the liquid gold into jars.