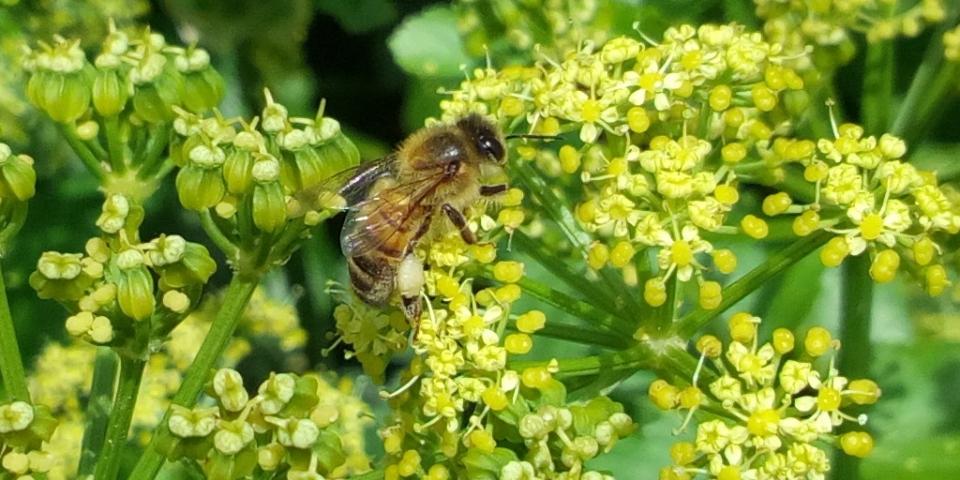 While out walking our dog along the country lanes, a certain whiff in the air caught my nose at the weekend and it's one that you don't easily forget - it was the distinct smell of Alexanders (Smyrnium olusatrum) growing in the hedgerows. Looking closer, the flowers were covered in honey bees and other insects gathering pollen and nectar as their reward.

It was round about this time last year that I wrote about these tiny green-yellow coloured flowers and having researched the plant, found that the Romans used to eat the leaves, stems, roots and buds. Although it's native to the Mediterranean, it seems to thrive quite well here in the UK. It's certainly in abundance down here in East Devon. Apparently the Romans used to call it the pot herb of Alexandria and has a flavour between celery and parsley while the black seeds later in the year have a spicy or peppery flavour.

I might try it one day, but for the time being, am happy to watch our wonderful honey bees and other insects foraging for much-needed pollen and nectar at this time of year.

Looking around, we also have the field maple coming out in flower and the holly tree buds are beginning to burst open. I've also noticed a few Holly Blue butterflies fluttering around the holly trees and it seems that the females lay their eggs in the springtime at the base of the flowering buds on holly bushes. Gazing higher up there are bumble bees, hover flies and our wonderful honey bees gathering nectar from the flowers that have opened to invite pollinators towards them.

Up at the apiary today, I looked in on one of my colonies that I had previously split as part of my swarm prevention. Being on a double brood box, I knew they would draw a few more queen cells. Rather than destroy them all, I made up another nuc box and transferred a frame with one of them over with nurse bees in attendance. It was an opportunity to have another spare queen should anything happen to the new queen in the original hive. Doing the calculations, she should emerge in the coming week. Looking at the 14 day weather forecast, her mating flight should coincide with warmer weather if all goes well.