A glimmer of hope for swarming bees 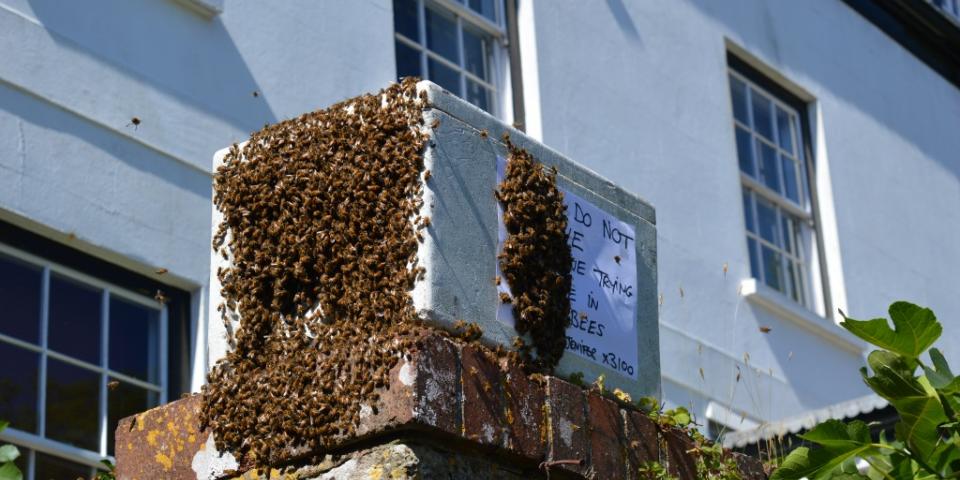 Has it really been nearly 2 months since I last jotted down some of my beekeeping adventures? Well, what a way to come back - luring a swarming of bees out of a roof space at work and into a bait hive!

This time of year is when honey bees are likely to swarm as their colony sizes grow and the next generation needs room to expand. It’s a beekeeper’s job is to try and prevent that from happening as not everyone likes honey bees and they could be seen as a nuisance, especially when they take up residence in your roof space – and that’s what happened at work last Thursday!

Having heard about the swarm on Thursday and hearing that a pest controller had been called, I couldn't just leave them to their fate so had to try to do something. After putting out a bait hive as soon as I got to work early on Friday, within a minute I noticed there were a small number of bees taking an interest so there was a glimmer of hope.

As the offices are in a working environment, and because the bees had chosen the roof space, it’s just about impossible to get them out without it costing hundreds if not thousands of pounds. Luckily, I got a chance to speak to the pest controller on Friday morning when he turned up to take a look as I happened to be checking how the bait hive was doing. He said if the bees don't leave, then sadly the only option is for them to be destroyed. So this really was a last-ditch effort to try and save them.

Throughout the day I dropped by to see how they were doing and there was definitely some interest but still didn't know if this would work.

At 2.45pm I got a call to say the bees were on the move! They swarmed out en-masse and did a small loop over the roof top into the garden area behind and swooped back round and into the bait hive. It was really a beautiful sight to be stood under watching!

At no time was anyone in any danger as in swarming mode the bees are actually very calm and placid. As a responsible beekeeper, I still get togged up in my beesuit when collecting swarms - all adds to the drama!

How Friday all unfolded -

Bait hive in place at 8:30 am to try and lure the honey bees out of roof space above offices.

At 2:30 pm the bees couldn't resist the lure and vacated en-masse the roof space to take up their new residence.

At 6:00 pm the job of transferring the over-sized colony out of the bait hive into a larger space began. First all the honey bees inside the bait hive were shaken into the new box and those on the outside of the box also shaken in.

To avoid stressing the bees any more than they already were, I shook the majority of the bees onto a board for them to walk in by themselves. By 8:00 pm the bees were still walking up but the good news is their Queen bee was already inside so they were on their way to join her.

All quiet in the garden. Job done and finished about 9:45 pm. Time to go home!

The plan now is for me to move them later in the week once they have settled but in the meantime, they are in temporary residence at work cordoned off.